For those of you regularly using Google+, you may have noticed the addition of Google+ communities late last week. For those of you using other forms of social media rather than Google+, this launch is Google’s attempt at inserting the Facebook or LinkedIn group functionality into their social network.

So what are Google+ Communities?

Users are able to cross post in Communities right from their main profile stream, which I feel is a real advantage over the Facebook group feature. Users are also able to set up either public or private communities – in what seems to be another attempt at offering enterprise social networking. They are discussions formed around certain topics or common interests, set up to help users share information and voice their opinions with other members of a particular interest group. 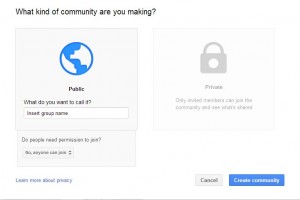 As with many of the other features on Google+, Google have seemingly ‘copied’ this functionality over from other networks. However, there are areas where they have attempted to improve on previous attempts. For example, you can filter through different communities by category. And what I really like about the communities feature is that all the other Google+ features like photos, events and +1s are seamlessly integrated into it. And it’s usability benefits like these that are really making Google+ stand out against other social networks from a design and user experience perspective.

What this means for your business.

Let’s say you’re a local gym business, and are looking to market to people interested in health and fitness in the local area. You’d probably want to start by finding any associated groups on Facebook and LinkedIn, and Google+ is yet another area you should be utilizing to monitor and initiate conversations with your target customers. As it’s a new tool, it provides a great opportunity for you to set up relevant groups and start conversations in your industry before your competition.

Setting up and joining common interest groups will of course allow you to speak to your target customers in a less commercial way than say, your blog or newsletter communications. It will also enable Google to judge the authority and have further control over experts of particular specialisms or topics, listed as communities. If you are an expert in a particular area, then Google are now allowing you to demonstrate this and communicate with others in your field of expertise. It is my opinion that this information will be used in the future to optimize search.