Have noticed your Facebook friends being a little more animated than usual? That’s because a new kind of computer-generated comic strip has been flooding the newsfeeds of Facebook. 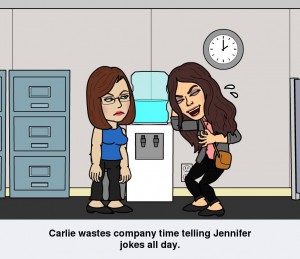 Earlier this year, Bitstrips was released and quickly became the most downloaded app for Android and No. 1 in the App Store for iPhone. In fact, this app has been so popular that many users of this app have experience spontaneous crashing; at one point the company’s servers were so overloaded that their website was inaccessible. According to Facebook, Bitstrip has more than 10 million monthly users.

So what exactly is it? Bitstrips allows you to create an avatar of yourself to put in funny comics, and gives you a choice to add “co-stars” (your Facebook friends) to your comic.

After creating your Bitstrip, you have three options: Create a “status comic” in which you show your mood or what you are doing. You can make a “friend comic” where you and your “co-star” are in the same comic strip, or you can make a “greeting card” for any occasion.

So what’s the point?

One of the great things about Bitstrips is that it offers a larger number of situations and backgrounds for you to create a comic. They are pre-captioned, but you are able to change the caption, add a word or thought bubble, and adjust your avatar’s facial expression and body.

True, Bitstrips is a “just for fun” application, and many Facebook users are already looking for a way to block them from their newsfeed, but at least most of the comics are a good source of humor and it’s not as annoying as farmville!

This article and more can be found at Huffingtonpost.com